I bit the bullet on my first Hasselblad (header image, copyright Cambrian Photo, Colwyn Bay) on Boxing Day 2020. Experts will immediately notice that it’s a bit of a Frankenblad, with an incongruous silver 1960’s lens on a millennial 503CW body and magazine. There are fans of the older silver lenses, so perhaps it’s not so monstrous a combination. Optically, the older lenses aren’t any different to the newer ones, and the multi-coating of the T* lenses was more about marketing than optical performance, according to Ken Rockwell. What I’m hoping to discover is that the previous owner knew his Hasselblads and that this is a very good combination indeed.

Introduction and the cost of Hasselblads

My wife and I met a guy one frosty morning, out in the countryside with a Hasselblad while his other half was at a car boot sale. He had bought the camera but was unable to tell his wife. I am more fortunate, and my wife is not averse to me owning a Hasselblad but we are both educators and not that flush, so a little humility and frugality is in order. She has helped me be smart and not so impulsive, and had me talk her through the due diligence and research I have done since that first GAS1 attack a year ago. That said, I have had encouragement in my desire to own a Hasselblad camera system:

The piece I refer to in that Tweet is David’s personal reflection on the Japan Camera Hunter blog, in which he sketches the history of Hasselblad and his own passion for the brand. In that post, David describes the development of the cameras from the early models with focal plane shutters and Kodak lenses, to the copal shuttered Zeiss glass that has been part of the success of the V-series. It is these cameras, that became known as the V-series, that I’m keen to explore. David makes an important point that resonates with me:

The parts of the system

There are separate and distinct parts to the V-system that need to work together to make a camera. The lens attaches to and works with the body to capture light. The body is more than just a box to mount things on to: it houses the controls, the mirror (these are single-lens reflex cameras) and provides the framework for the other system components to interface with. The viewfinder is for the operator to compose the scene with, focusing on the screen. The back captures the image on to film or a digital sensor.

The 500 series cameras, including the super-wide angle SWx (which have fixed lenses), all have a shutter speed from 1 second to 1/500 s (hence the series name). A leaf shutter is in the lens. Later 2000/200 series bodies revert to a focal plane shutter which can fire at up to 1/2000 s. Those have proved to be less reliable than leaf shutters.

Whilst many reviewers and vloggers have 500 CMs, and I really don’t care about flash, the newer models with better mirrors, second shutter coatings and a bright screen seem to be more attractive for a first investment. The newer, slightly larger mirrors in the 503CW and 501CM only make a significant difference with long lenses (in the viewfinder, the older ones have more vignetting).

The C indicates compur-shutter compatible, and M is a modified designation. CX and improved CXi are TTF/OTF X-sync flash compatible. The SWA super-wide angle bodies are based on the older series one and two cameras (1000 and 1600). On the lenses, F indicates a focal plane shutter with additional letters to indicate compatibility: FC, FCM and FCW are compatible with Compur lenses.

There is a lot of detail out there on the range of lenses in the V-system, and again, Emulsive is your starting point for this. Pertinent details are that most of the lenses are Zeiss glass, with the C T* designation indicating multicoatings. The “standard” V-series lens is the Zeiss Planar C 80mm f/2.8, being the diameter of the 56mm square image at the film, and being close to “normal” vision. Some initial preferences for a lens:

C/CT* lenses are earlier, often found in chrome. They have self-timers and an automatic depth of field indicator (two red marks). C lenses can be used on any V system camera that has interchangeable lenses (i.e. all except the SWC). The T indicates multicoating. Note that the 80mm kit C lens sold with the 501C camera is in fact a modified CF lens. Most C/CT* lenses take B50 bayonet filters.

CF lenses are less “pointy” in appearance and have B60 bayonet filters (because the end of the barrel is wider than the C/CT* lenses). The barrel includes hyperfocal distance scales. The F indicates that the lens is compatible with focal plane shutter bodies. Prontor CF shutters are more reliable than Compur Synchro. 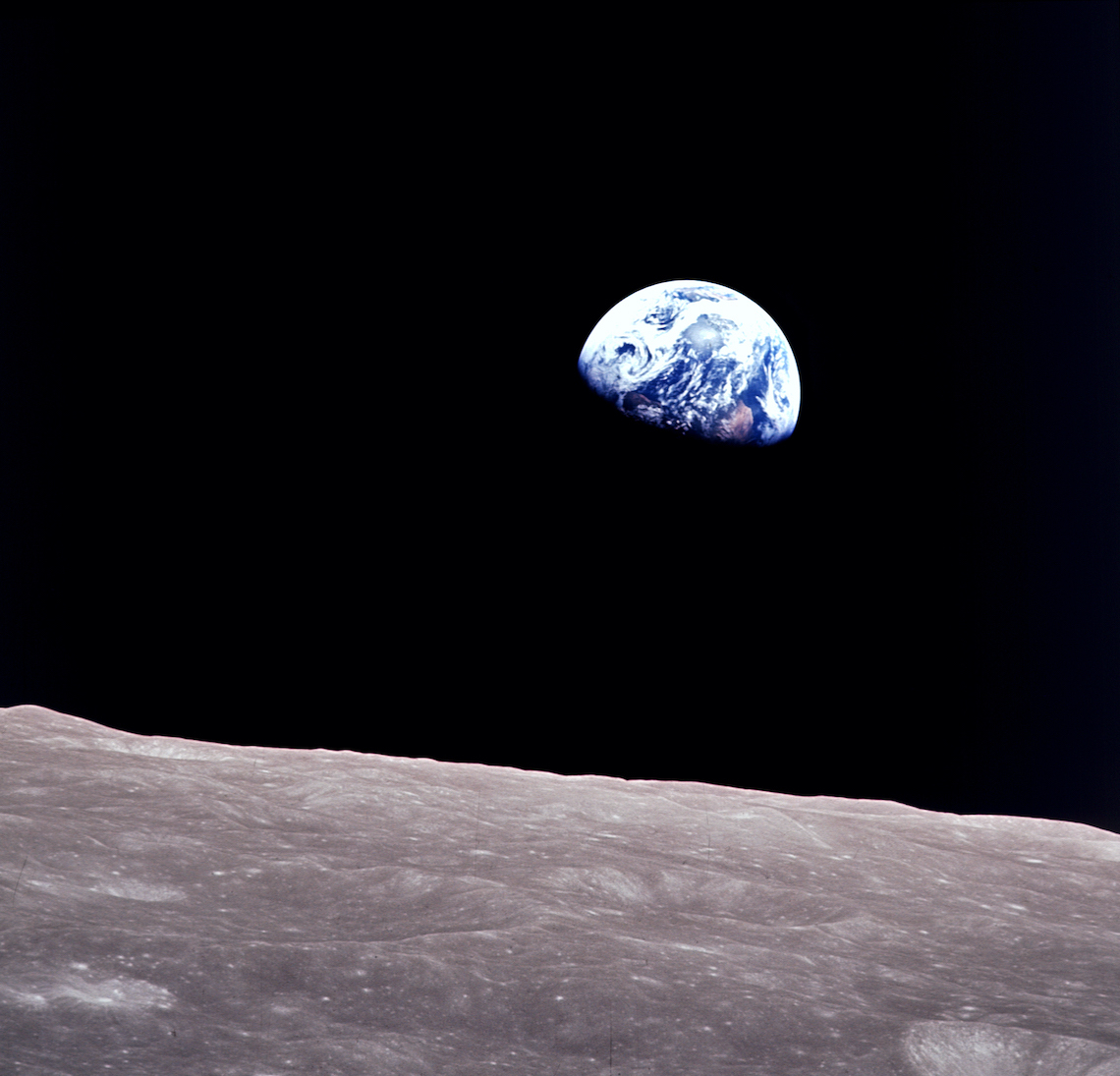 Earthrise This is the iconic image taken on Christmas Eve, 1968 by Bill Anders during the Apollo 8 mission, on a Hasselblad EL/M and Zeiss Sonnar f/5.6 250mm lens. The Command Module Hasselblad electric camera was normally fitted with an 80mm f/2.8 Zeiss Planar lens, but a bayonet-mount 250mm lens could be fitted for long-distance Earth/Moon photos (NASA). See also Wex’s and NASA’s articles on the Apollo 11 cameras.

Hasselblad have made improvements with each iteration of the film backs: the later type IV backs have a dark slide holder which I imagine will be a very smart thing to have for a system in my hashy hands. If there’s a nice safe place to put the dark slide, then I’m less likely to sit on it or drop it in a river. This Hasselblad is going outdoors. Ken Rockwell has a simple guide: there are four generations of A type film magazines (“backs”). There’s no functional difference between them.

What I settled on was this:

You do have to take your time and do your homework, I am learning. eBay is not usually the right place to buy anything over £100, because it’s full of crims and druggies. There are good sellers there, however, including reputable businesses. Ken Rockwell’s guide is right on the money when it comes to evaluating sellers:

“The seller’s feedback rating is a better predictor of the quality of an item than his description of it.”

I’m stoked to own my own Hasselblad camera: 2021 is looking to be a good year already.

As well as David Mitchell’s piece in Japan Camera Hunter, I am grateful to a number of authors and publishers for sharing useful guides and instruction on the Hasselblad marque, not least of which is the superb Emulsive Hasselblad V-System Master Guide by Emmett Brown2. If you’re curious about Hasselblad, you could do worse than just read his articles. Others, in no particular order, include Photoethnography; Hasselblad historical; Wesley King’s review of the 503CW; and Hasselblad.com.

There are lots of other videos and posts that I’ve found since first posting this article, but I really like this one by Sails Chong:

“A collection of shiny smile”, indeed.